The final mechanism on this model was the upper spring folding mechanism. This mechanism consists of one spring and two indentures, one at either end of the spring. The indentures are designed specifically for sliding back and forth in the hole that is cut into the model body. Much like the lower folding mechanism, the upper mechanism needed to be designed to allow for proper cable pass through. To ensure no cables would get pinched, and minimal cable/part friction when folding/ unfolding, I designed the mechanism so that the cables would remain coaxial to the arm rotation.

The spring puts force on the indentures and forces them into the upper arms. The upper arms have a small indents on them as well to help them lock into place when they are at specific locations. Below are the calculations that I made to determine the minimum force required to keep the arms from folding. These calculations were made when the model is static and in an upright position.

To easily conceal the battery, an enclosure cover was designed. Initial plans for this enclosure was a tabbed mechanism which would clip into the main body. I decided not to go with this due to the fact that 3D printing produces layer lines. These layer lines act like defects in the materials surface. Bending the tabs would have most likely ended in part failure.

My final decision was to create a switch mechanism which would simply slide in a slot which was built into the body of the model. The switch isn’t attached to the model, so it can be removed easily. It relies on the friction between the plastic of the model to stay in place. Future design changes would be to add a spring mechanism to keep the switch pressed against the cover. 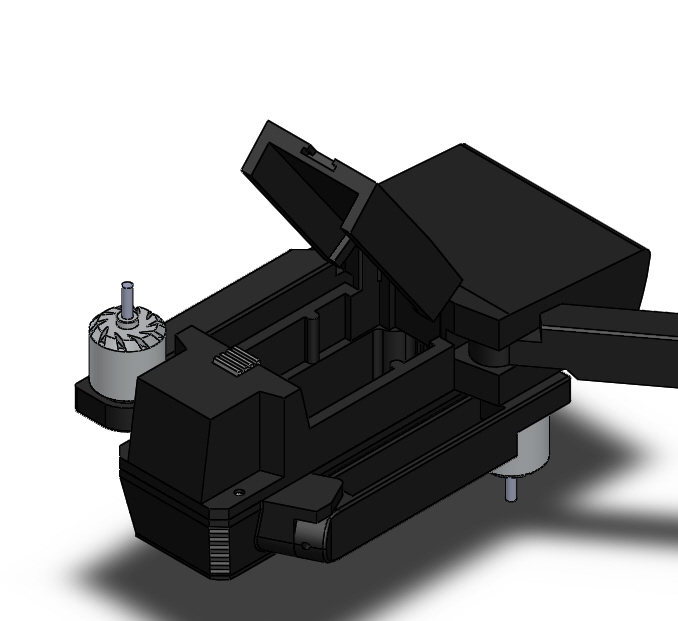 After designing and calculating all the necessary information, I 3D printed all the components in order to create a physical working model. Below are folded and unfolded views of the quad copter after 3d printing and assembly.